Keeping you and the Environment safe

Waste Alert Patrol is based on the principle that "someone other than the criminal has information that can solve a crime" and although law enforcement is useful, we believe that garbage men have also a good eye. Considering they travel around the city due to work, they're in the streets and potentially a great crime tipping tool for both local markets and even in a national scale. It was created to combat three major problems faced by law enforcement: fear of reprisal; an attitude of apathy; and reluctance to get involved. Crime Stoppers resolves these problems by offering anonymity to people who provide information about crimes and by paying rewards when that information leads to an arrest.

our mission of the program is to receive information anonymously and pay rewards for tips leading to arrests. We aim to have the Waste Industry partner with law enforcement agencies, the media, and the community in solving crimes and getting criminals off the streets.

Other Great Outcomes from The Waste Industry!...

The Washington County Sheriff’s Office says the garbage collector was emptying a trash can on SW Minter Road when he noticed the contents were not emptying. He took a closer look and found the kitten hanging upside down from its back legs, covered in spray foam. He could hear it whining.

The driver took the garbage can and kitten back to the Hillsboro Garbage Disposal Facility and staff there worked to remove the spray foam. They then took it to a veterinarian.

The kitten is an 8-week-old male and is recovering at the Washington County Animal Services’ Bonnie L. Hays Small Animal Shelter.

The trash can came from a property with multiple units. Officials say the kitten likely belongs to one of two feral cats that live there and have kittens. The cats are owned by someone who lives in the area and help with rodent control.

Officials are investigating and say this was an act of animal cruelty. The kitten will be returned to its owner after the investigation is complete.

The Traveling Trash Men have come to Baltimore to help remove garbage in West Baltimore over the next few days, WBAL-TV 11 reports. 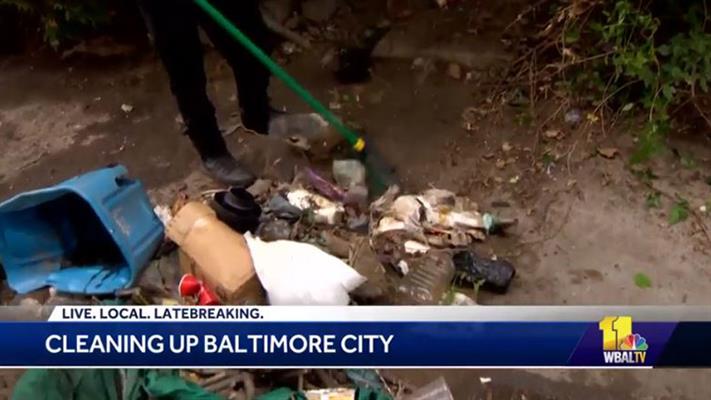 The eight-person team came all the way from Jupiter, Florida with their own garbage truck to help clean up dumped trash from streets and alleyways.

Rourke said he had heard about Baltimore's trash issue through the president's Twitter posts. He said he is not here for politics, publicity or to place blame.

The group has cleaned the sidewalks, streets and alleys in more than 12 square blocks. The traveling men plan to return home Sunday.

While already doing a lot of volunteer work for the city, a few of the trash men are credited with helping two people who appeared to be overdosing from drugs Thursday. They gave the men the opioid-reversal Narcan and called the police.